Shared Learning 2020: Student of the year

Provide a brief overview of your project?
The project was under Tanzania Pharmaceutical Students’ Association (TAPSA) which brings together Pharmacy and Pharmaceutical sciences students in Tanzania mainland and Zanzibar.

TAPSA Antimicrobial Resistance Campaign(TARC) focused on the promoting the rational use of antibiotics and evaluating the impact of the previous campaigns that TAPSA has been doing in combating Antimicrobial Resistance since 2017. The Third Round of TARC started on 9th September 2019 and was done intensively until 10th November 2019 when the pharmaceutical students in Tanzania returned to their universities from holiday. The campaign was conducted in 21 administrative regions in Tanzania and aimed to reach 11 targets which are Youth Groups, Secondary and Primary Schools, Television and radio stations, Hospitals , Health centers and dispensaries, Community gatherings and pharmacies. By November the campaign had reached more than 70,000 people and over 240 events were conducted during the campaign period. On Mass media the campaign had a reach of over 5 Million by conducting more than 20 events in Radio and Television stations in Tanzania during the campaign period. A summary report and progress of the campaign was disseminated at a symposium that was done during the World Antibiotics awareness week in November 2019 in order to share impact of our efforts with other health care professional organizations , policy makers, and researchers so that they can join our efforts and learn from our successful organization of the campaigning events.

The campaign has been endorsed by the ministry of health in Tanzania and some of the awareness materials were offered by WHO country office.
Please cite 3 examples of outcomes or impacts from the project on tackling AMR.
Impact on Tackling AMR

How is the project to be developed in the future?

The Project will be developed in the following ways :

Provide a brief overview of your project?
I worked with a team of other two undergraduate to understand the awareness and knowledge of Public Health Students in the University of Calabar on the role of Water Hygiene and Sanitation on reducing the prevalence of Antimicrobial Resistance. Our Findings revealed the Students have low knowledge on both AMR and WASH. We conducted an online training, where we taught over 500 Public Health Students in University of Calabar, Nigeria on The role of WASH in fighting AMR. An abstract of our study was presented in a national environmental health conference in Nigeria(Conference on environmental health science) 2019 and the abstract was published in the abstract book.
Please cite 3 examples of outcomes or impacts from the project on tackling AMR.
Following the online training;

How is the project to be developed in the future?
We plan to move the project forward by implementing the training on the role of WASH IN FIGHTING AMR in 10 different Universities in Nigeria and on a later note take the training across different institutions in the 36 states in Nigeria. Also we planned on creating a Massive online open course using a learning management system to cover a wider range of Students in Nigeria.

Barts and The London School of Medicine (Olivia Knowles)

Provide a brief overview of your project?
Antimicrobials are a hot topic, with resistance being an ever increasing concern. Thus, appropriate prescribing is crucial. This study aimed to assess prescribing appropriateness of cephalosporins, quinolones and co-amoxiclav (broad-spectrum antibiotics) within a GP practise in Oxfordshire over a 3-month period. Common situations in which these drugs were prescribed inappropriately were identified and discussed with the GPs at the practice. This will ultimately help to reduce future inappropriate prescriptions which may contribute towards antibiotic resistance. Based on the results of this study, recommendations for broad-spectrum prescribing were made to the GP’s and changes were put into place to improve broad-spectrum prescribing in the future.
Please cite 3 examples of outcomes or impacts from the project on tackling AMR.

How is the project to be developed in the future?
Medical students are often required to undertake projects at GP practises as part of their degree. I wish to expand this project across multiple medical schools, giving many GPs the opportunity to audit their antibiotic prescribing through the work of medical students who are with them on placements, encouraging appropriate antibiotic prescribing nationally across GPs. I have already had great interest from medical students at several universities wishing to get involved and who wish to copy this simple yet effective project on their own GP placements.

Provide a brief overview of your project?
Young people, particularly students are the future stakeholders in health, education, policy making, leadership, and politics. Sensitizing them on Antimicrobial Resistance (AMR) will make it easier to inculcate multidisciplinary interventions in the fight against AMR. Students Against Superbugs Africa is a student-driven project under the guidance of health professionals. We empower and mold our fellow students and young people to become lead guardians in the fight against Antimicrobial Resistance through education, infection prevention, research, and innovation.

The project is anchored on a One Health Approach and involves students from all faculties. Through education forums, we sensitize students on the existence, dangers, and practices of curtailing AMR. To instill a culture of social responsibility and the spirit of an Antibiotic guardian, interested students are enrolled as volunteers in our community based program in urban informal settlements. These settlements bear the heaviest brunt of AMR due to poor sanitation and inaccessibility of quality healthcare services. In liaison with fellow students, we educate the residents on AMR as well as design and implement sustainable interventions aimed at improving their health which translates to reduced spread of AMR.

So far, we have organized many AMR awareness forums in tertiary institutions in Kenya and have been able to educate over 3000 university and college students across the country. Earlier this year, we were honored to be among the winners of the 2020 Students Project For Health Awards. In light of COVID-19, we have partnered with ReAct Africa and initiated a student webinar series aimed at educating students on the concepts of AMR. We have also conducted a survey on the knowledge, attitudes and practices of the youth in regards to AMR to identify the critical areas to focus on. To learn more about our work, kindly visit our website at: https://studentsagainstsuperbugs.org
Please cite 3 examples of outcomes or impacts from the project on tackling AMR.

How is the project to be developed in the future?
Currently, we are in the final phases of remodeling the project into a fully-fledged organization. This will be critical in diffusing the project to others African countries which is our long term goal. To simulate pilot projects in other African countries, we have been working closely with regional and respective local student organizations. Upon our full transformation to an organization, we will be able to forge more collaborative partnerships with relevant stakeholders and deepen the impact of our work.

We are also designing a research and innovation hub aimed at empowering and supporting students to take up research on AMR related projects. Students have many ideas and creative solutions to many challenges but lack a platform to implement them. The innovation hub will tap into their creativity and help students nurture their ideas into feasible solutions that can play part in curbing the spread of AMR.

Lastly, to ensure sustainability of the project, we are in the process developing SAS clubs in secondary and tertiary institutions in Kenya. Anchored with a well-defined constitution and transitory structure, the clubs will increase the dissemination of AMR education in their respective institutions and other related interventions. We will see to it that they are well enshrined in the institutions. In the future, we also plan to work closely with education stakeholders for inclusion of basic and easily understandable concepts of AMR into the mainstream curriculum in different African countries. This will allow early mass sensitization of children at a younger age, reducing irrational use of antibiotics right and molding them to responsible adults and professionals.

Provide a brief overview of your project?
My project aimed to strengthen the participation of farmers in the fight against antimicrobial resistance. It involved an initial public engagement program in Nigeria and an ongoing antimicrobial stewardship program. This project was borne out of concern from the preliminary results of my PhD research at the University of Cambridge. Following analysis of questionnaires on Knowledge, Attitude and Practice of poultry farmers on antimicrobial resistance and farm data on antimicrobial usage collected for my PhD research, it was apparent that there was a huge knowledge gap in farmers’ knowledge on antimicrobial resistance. This finding also matched the results I got from the lab where high number of multidrug resistant strains were identified. I was really concerned about this trend and resolved to take action especially because farmers in the country are often not considered in programs on antimicrobial resistance even though many studies reports high use of antimicrobials in food animal production. I was able to secure grants that enabled me organise a public engagement program on antimicrobial resistance in Nigeria. The program brought together key stakeholders in the country including farmers, veterinarians, government officials and academics. Over 200 farmers attended the event, and participated in discussions and focused group discussions aimed at improving their awareness of AMR and mapping out strategies that would help to reduce the use of antimicrobials on farms while improving biosecurity. Logbooks were distributed to farmers in which they recorded usage of antimicrobials on farms. Since February 2020, participating farmers have sent screenshots of the completed pages of the logbooks to dedicated numbers on WhatsApp and would receive a phone call once in a month to remind them of the key messages and check progress. Key messages from the program reached a wider audience following the broadcast on the National television. Project twitter: @pepf_amr
Please cite 3 examples of outcomes or impacts from the project on tackling AMR.

How is the project to be developed in the future?
I hope to organise more programs on antimicrobial resistance in different parts of the country and to collaborate with more farmers associations so they can own the program and ensure its sustainability. 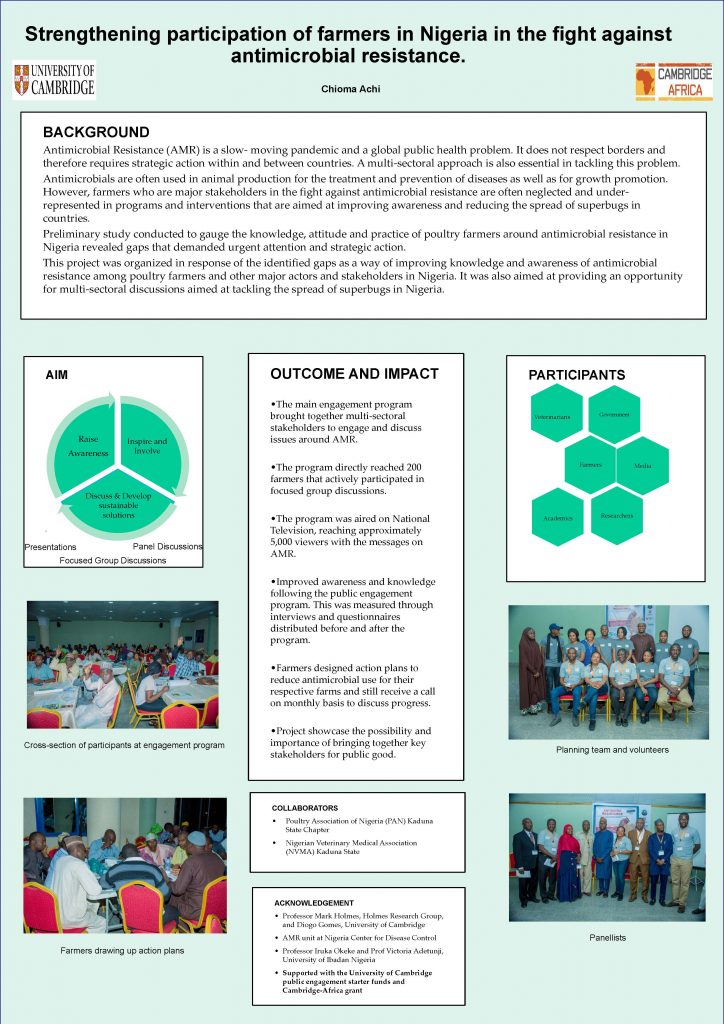 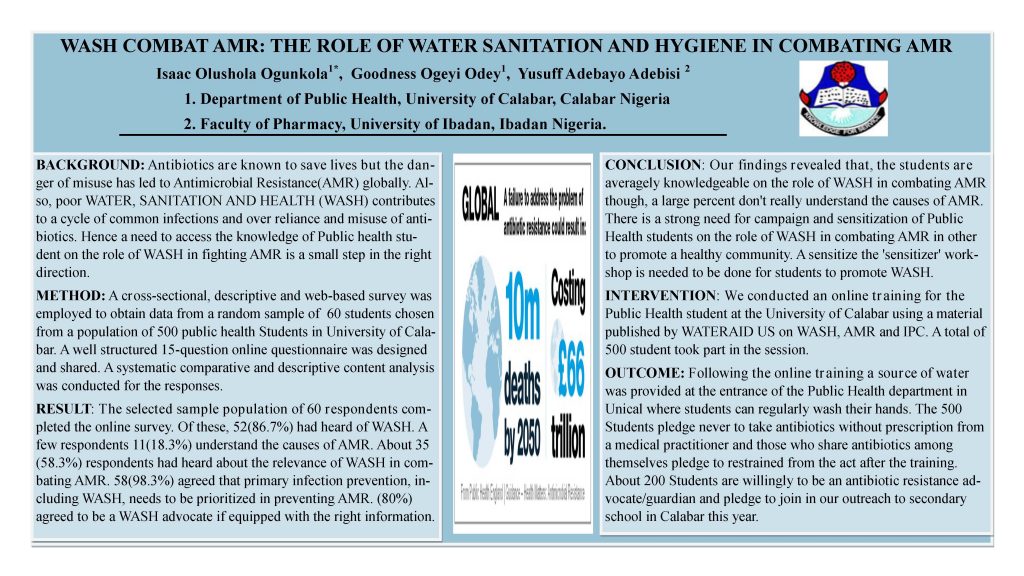 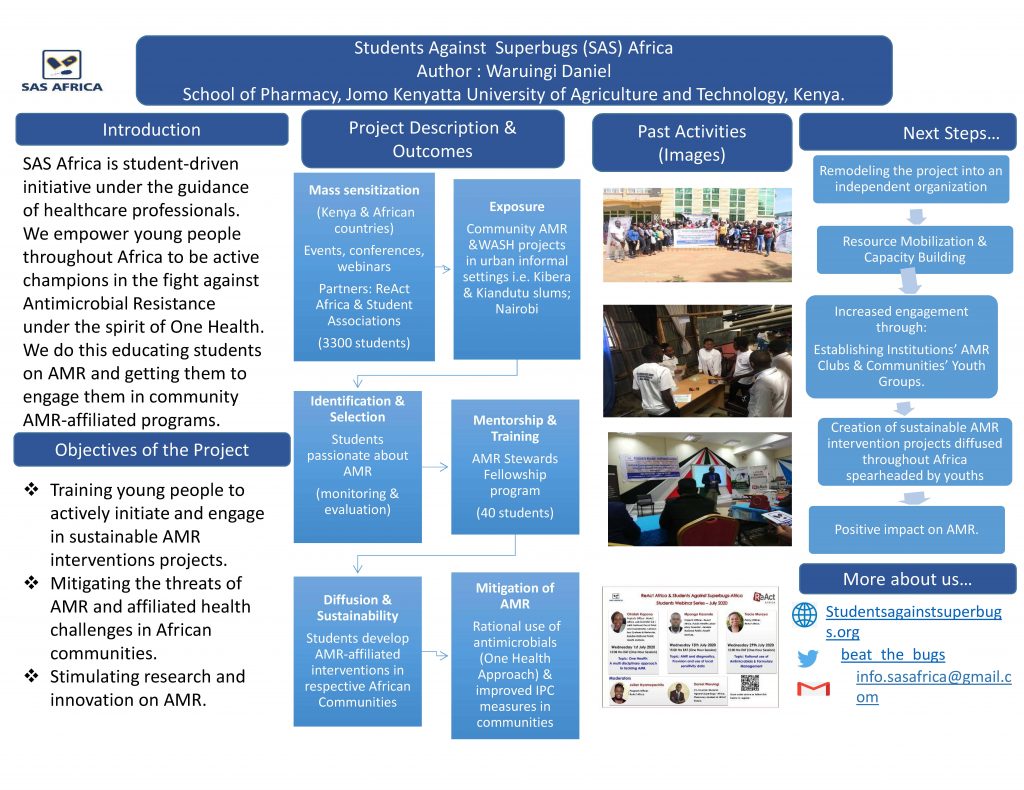 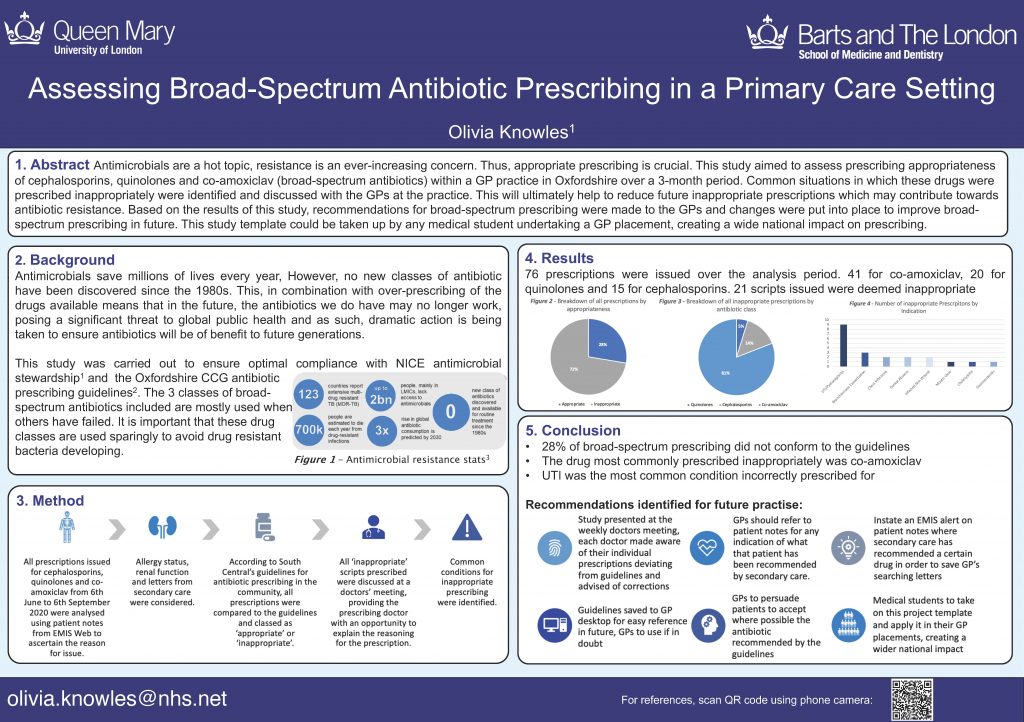